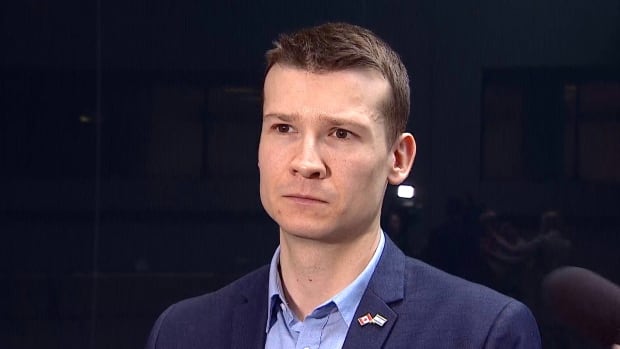 Jeromy Farkas says the fight to become Calgary’s next mayor has become what he calls a â€œtwo-horse raceâ€.

He joined two of his council colleagues who are also running for mayor at a forum hosted by the Calgary Construction Association on Tuesday.

Recent polls have suggested Farkas and Jyoti Gondek were the first among determined voters, while city councilor Jeff Davison has consistently been third.

During the discussion, Farkas aimed for secrecy at the town hall.

He said that as mayor he would take steps to reduce closed-door city council meetings.

He also mentioned an accounting problem last year as an example of Calgary businesses’ mistrust of City Hall.

The city inadvertently took millions of dollars in interest it earned from a fund made up of developer levies.

Instead of using that $ 56 million to fund new infrastructure in new communities, the money went into general revenue.

Following a review, this money was returned to the original fund.

â€œThe establishment of the town hall, the administration, including the planning department for which Councilor Gondek as chairman of the committee, essentially got away with crushing money – millions and the millions of dollars the industry had poured into that fee – and reallocating that income interest into other priorities without actually showing the revenue to the industry, â€Farkas said.

Gondek objected to this characterization. She said if Farkas wins next week’s election there could be some tough times ahead.

“If this is how you are going to build a relationship as mayor of the city with your administration, I find it hard to see how we can ever accomplish anything,” Gondek said.

â€œThere are accounting errors and then there is bad activity that wasn’t happening,â€ Davison said.

“The argument that they were skipping the top has criminal implications and I think none of this was happening and he owes them an apology.”

That wasn’t the only item Gondek and Davison opposed during the session.

Farkas said he voted against the city council’s downtown strategy because it focused on “the wrong things”.

He calls for improvements in the public realm and subsidizing the cost of converting empty office buildings to residential use to encourage more people to live, work and play in the center.

Farkas wants to open a police station in the city center to attract young people because he says it will make them feel safe. He also wants to do more to make sure the city center is not flooded in the future like he did in 2013.

Gondek said she supports the downtown strategy as a way to diversify and revitalize downtown Calgary.

She said the $ 45 million fund to help with the cost of office conversions was already fully subscribed.

In addition, she highlighted the recent opening of an office on Stephen Avenue in the downtown area where police and other agencies can work to better manage social unrest and help vulnerable populations in the center.

For his part, Davison said he supports doing more to strengthen downtown as Calgary’s economic heart and invest in major projects that will attract more people and businesses to Calgary.

Calgarians will vote in the municipal election on October 18.

On Tuesday, the city said more than 141,000 people had already voted in the advance poll.

The new city council will be sworn in on October 25.

Why COLA Social Security will jump next year